Conceptual bases of the project.

The project aerea is bordered by the river Fez from south to north, and located near the center of the city fabric of the medina.
The structure of the medina is very massive and dense, with its various courts and urban voids that characterize the plasticity of the territory.
According to a more careful visual analysis to the east and west of Place Lalla Yeddouna, you can see some rigorous and even more massive structures, with a strong parallel lines on the roof: these are the mosques, the largest is the Quarawiyine Mosque.

With the dimensional and planimetric rationality that denote them, the places of cult breaking the rhythm of urban medina, become the focus of attention and in contradiction with spatial perception. The water, the natural element breaks this rationality giving life to our project.
The river dissects the planimetric and organized rigorousness of the roof of the mosque, dragging and redistributing the modularity along the banks of the river, which redefines a new city front on its own.

The banks then become the dynamic element that gives new prospects for new views to the urban fabric, creating transparency and connections between the banks of the river at different levelsand in different directions.
The architectural elements are extruded on the river, as to protect the walk, which gives new life and usability of the banks where there are terraces, shops, parking areas, and viewpoints.

A series of stairs, ramps and lift creates an osmosis, which is necessary in order to resume the relationship between the square Lalla Yaddouna and the long river. This acquires a new significance as a square, in fact placing certain architectural scenes we have created a routethat connects the various urban voids ; from the Bin Lamdoun City parking lot, going to the new pedestrian bridge, going on to the square facing the residences and still to Lalla Yeddouna, up in the aerea of interconnection B.

The terraced houses characterize all project intervention. They always have a double overlooking the river and the medina. The facades of the river are characterized by a shielding made of terracotta elements that allow the connection and the different positions in space by setting ever-new geometry plastics on the same face, which in most cases close distribution balconies or lodges.
The roof is sometimes topped with a woven natural fiber to ensure the shade of the terrace and create a skyline at nignt, with lights and reflections along the river that deeply impresses the position of each building. 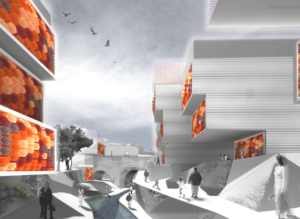 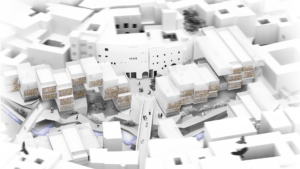 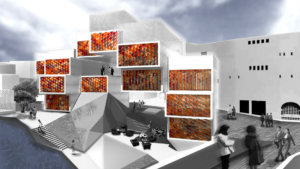 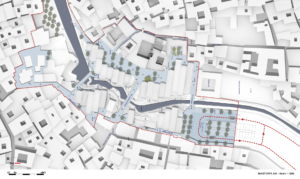 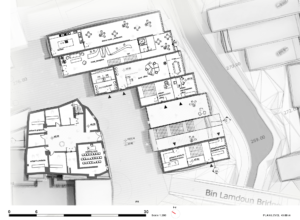 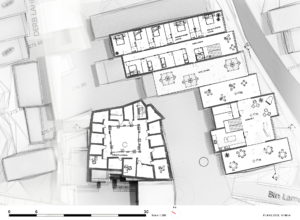 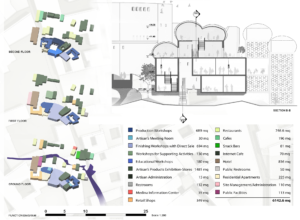 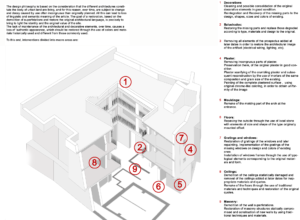